Photo above: Donovan Thompson (Tehoniehta:ronweh) and Josiah Maracle (Ronkwe’tiyohstha), from the Everlasting Tree School, drum for the group July 19th.

Unlike in 2018 when the RSCT Summer Festival featured a week-long course on Indigenous Waldorf, this year there was no equivalent course. Nevertheless, the RSCT was pleased to welcome four young Haudenosaunee participants for the 2019 Summer Festival of the Arts and Education.

The RSCT Summer Festival takes place usually in the last three weeks of July every year and includes many courses geared to the part-time Professional Development for Waldorf Teachers program, along with other general interest and Waldorf-related courses.

Now that the Summer Festival has finished for 2019, it seems fitting to look back over a few of the highlights from the program. This will by no means be all-inclusive but rather a brief sampling of the experiences shared by participants during those three weeks in July, with some emphasis on indigenous students and indigenous themes.

Waldorf Essentials from 4 to 23

Waldorf Essentials is a introductory Waldorf 101 style course led by veteran teacher and musician Merwin Lewis of the London Waldorf School. Whereas last year Merwin’s course had only four students, this year there were 23.

Merwin spiced things up for his students with a Chladni plate demonstration showing the visual effect of a musical tone on grains of sand and mystified the entire class by shining a projector beam of light through two containers of colored liquid to produce a third colour that none would have guessed.

Kathie Young’s felting class was another group that continued to attract more students as the days went by. Each student made a felted wool gnome that stood about eight inches high,and a felted wool landscape picture. Many of the students also made little wool balls. One student felted some hair from a dog she once had and made it into a brooch.

Photo above: Hemlock (Iakovihwatoken) with three felted crafts she made in Kathie Young’s class in week two of the Summer Festival.

Felting class students were loathe to take breaks, preferring to beaver away on their projects. The focus, enthusiasm and excitement in the room was palpable. In the photo above they are holding the felted wool gnomes that each of them has made in the class.

Another course where participants made things was in Fiona Hughes’ nutrition course during Week Two. There, in addition to studying anthroposophical perspectives on health and nutrition, and discussing a wide variety of diets, students made kimchi, beet kvass, and fermented almond chocolate coconut balls.

Some classes benefitted from unplanned program additions. One of these was Marie France’s Movement Games course. On Thursday afternoon Liisa Hymander, from the Northern Lights School in Thunder Bay, joined the class as a guest presenter to show everyone how to use aerial silks. All the course participants got to try all the moves and tricks that Liisa demonstrated.

Liisa said she had started with aerial silks five years ago. She bought a silk and put it up in her house for her own children to play with. She worked with a woman who had attended circus school in Montreal and has also done some circus classes herself.

She says that when children have a buildup of energy and have a hard time handling it, it’s helpful for them to do any sort of inversion, whether it be hanging upside down in the silks or just a simple headstand. She said it helps to rebalance the body. Liisa has also worked with adults on aerial silks and she said they find it a good confidence builder.

This year, the day started with singing every morning from 8:30 to 9:00, ending with an Indigenous prayer and a reading from the Calendar of the Soul. The first week’s singing was led by Monika Sutherland from Wisconsin, who was also here to teach music for the grade intensives. She shared a lot of fun songs, some with movements, like the one from the Torres Straits Islanders (Photo of Monika leading that song below). 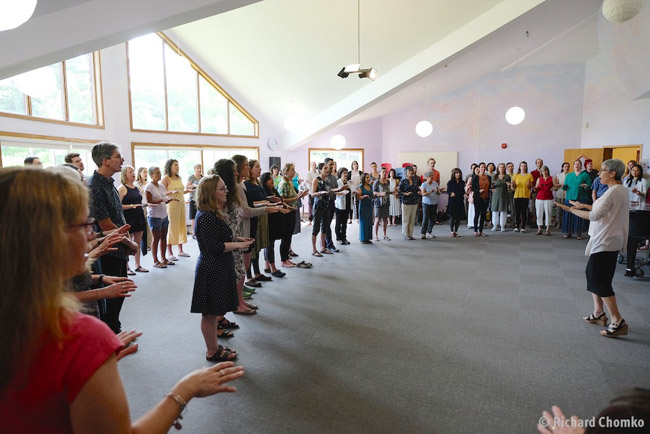 In weeks two and three the singing was led by Elisabeth Chomko, who teaches music in the full-time Waldorf teacher program at RSCT. One of the songs Elisabeth brought was an African tune, titled “Bemka Bafazi”. On the first day she sang it, she asked if anyone could translate the meaning of the words.

David Hesketh spoke up and said he could ask one of his Zulu friends from South Africa and get back to us on it. A couple days later, David had heard back from his friend that it was a song about “crossing over” which was at the same time about dying and about going to sleep, and about connecting with the ancestors who had crossed over. The song is sometimes sung at funerals. He said it was in the Mpondo dialect, which is a subgroup of the Xhosa language, used by people of the Eastern Cape area of South Africa, near the place where Nelson Mandela was born.

David had returned to Canada just five weeks earlier, from 19 years in South Africa, in the middle of which he taught in Vancouver for five years. David had been a graduate of the first RSCT teacher education course in the current location in 1990-91. Brian Searson was one of his classmates. During that year, David practice taught in James Brian’s Grade Two class at the Ottawa Waldorf School. Now this fall, he will be joining the faculty of the Halton Waldorf School, as pedagogical director. 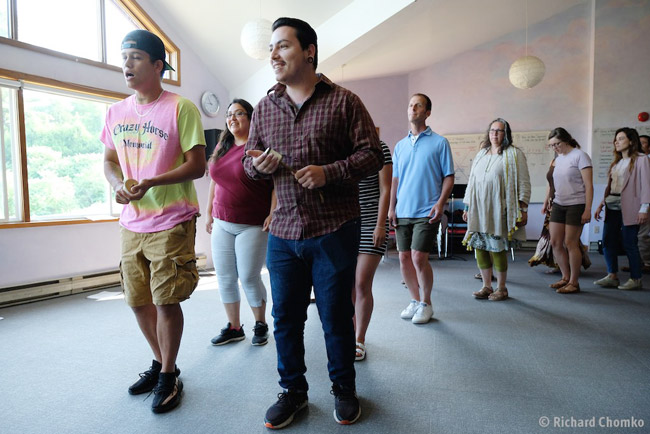 One morning as part of the singing, Elisabeth invited some of the Haudenosaunee course participants from the Everlasting Tree School (Donovan Thompson (Tehoniehta:ronweh) and Josiah Maracle (Ronkwe’tiyohstha)) to lead everyone in a song and dance (photo above). This attracted a lot of interest from the young Toronto Waldorf School campers outside who crowded around the music room windows to get a closer look. And in between Donovan and Josiah in the photo above, you can see Jocelyn Jamieson (Konwenten:ras), who is also connected with the Everlasting Tree School.