Douglas Cardinal wrote this, a few years ago, as a forward to the third volume of Rudolf Steiner’s lectures on architecture, translated by Frederick Amrine. We are reprinting it here with Douglas’ permission:

Photos are of Douglas Cardinal on Victoria Island in the Ottawa River, where he hopes one day to build an Asinabka Cultural Centre. Douglas was speaking to participants in an anthroposophical conference in the summer of 2016.

Architecture is a powerful medium that defines our everyday lives. When I am in the city amid the buzz of its activity what I sense most is the human chaos it produces. Cities and buildings have become functional, mechanical, analytical entities geared toward a materialistic and linear productivity. Human elements of love, beauty and compassion are, if not void, isolated to hermetic isles. Compartmentalization, alienation, and disconnection are paramount to mechanical efficiency, but originate much of our social malaise.

In the late 1950s, when I was a young architecture student at the University of Texas in Austin, one of my mentors who supported me in developing my own approach to architecture was Hugo Leipziger-Pierce. I felt, and still feel, that the profession should be geared towards creating balance and harmony between people and the environment. I wanted to develop my own practice to truly serve the needs of people by respecting and caring for families living more in harmony with nature, and with their own nature.

For this, Professor Leipziger-Pierce felt that it was necessary for my development to introduce me to the work of Rudolf Steiner. We spent many hours together as he translated Steiner’s philosophy of architecture, which at the time was only published in his native German language. I studied Steiner’s organic approach to architecture, its inspiration from nature, and the people who would live, experience and function in its spaces. The strong sculptural forms that he shaped into buildings captured my imagination and inspired me to approach architecture in a fundamentally different way. 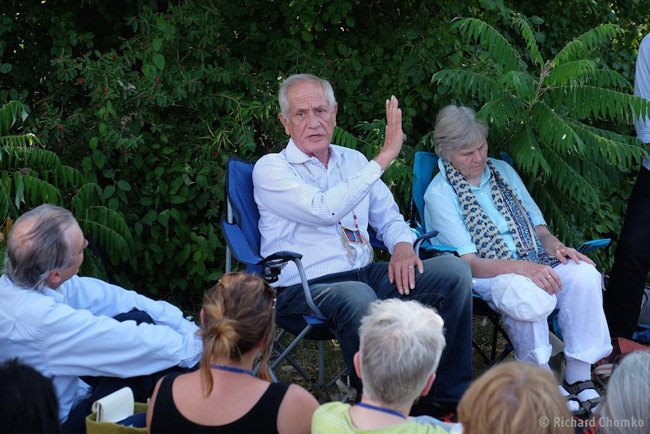 There is a strong spiritual emphasis throughout Steiner’s philosophy, which demonstrates a deep love and caring for all life, and a reverence and respect for everyone, particularly children. His philosophy is holistic and centered on multidisciplinary approaches to understanding the purpose and application of any single discipline. This understanding was reinforced by my own Anishnaabe elders who taught me that everything in the Universe is connected. Every action affects another.

The principles of organic architecture allow us to envision a building as an organic entity, where all stakeholders give shape to the form they will use and inhabit. It works with abstracted forms from within nature, as well as our own dynamic living forms, to create spaces that add drama to each function. Like an embryo, each cell or space is interconnected to each other. Placing that organism on the site, it evolves further to respect not only the internal forces that are shaping it, but the external forces as well, such as topography, landscaping, sun angles and wind patterns.

Many of these concepts, which I have come to apply throughout my architectural career, I learned through my study of Rudolf Steiner, who has remained a critical influence for me, along with others such as Francesco Borromini, Antonio Gaudi and Frank Lloyd Wright.

From Architecture to Education

In laying the foundation for the lives of our own children, my wife Idoia and I discovered Waldorf Education. Also based on Steiner’s insightful philosophy, Waldorf schools provide a similarly nurturing environment that connects discipline with the emotional, intellectual and spiritual growth of the child. This has confirmed for us both how important it is to share the work of Rudolf Steiner with as many people as possible.

I feel privileged to have been able to draw deeply from Steiner’s philosophy as an inspiration in my work and in my life, and believe that these translations will broaden his influence for the benefit of the architectural profession and society as a whole.