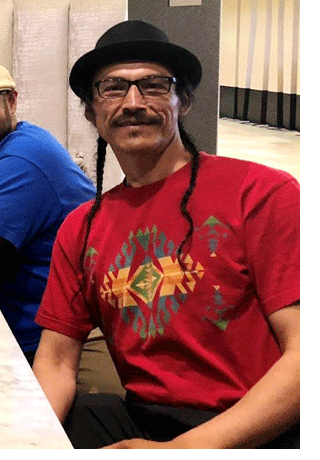 In recent years there has been a ground swell of interest in the role of Indigenous peoples, including acknowledgement of which bands lived on the land where schools are now located, and an awareness that teachers are the ones who can help spread awareness of, and respect for, Indigenous culture and people, to the new generations of students they are educating. On November 9th and 10th,  at the Rudolf Steiner Centre Toronto’s annual Waldorf Development conference teachers and parents will have a unique opportunity to hear from someone who is devoting his life to building a new synthesis of Waldorf pedagogy and Indigenous nehiyaw traditions to help new generations make a living connection with the Indigenous peoples and traditions that have gone before.

Online individual and group registration forms for the conference can be found at this link.

Indigenous nehiyaw educator Dale Saddleback was raised on the Pigeon Lake Reserve #138A, south of Edmonton Alberta, among the nehiyawak (Cree). He was among some of the last students in Canada to experience the infamous residential school system (but just for kindergarten and grade one as a day-schooler). The remainder of his elementary and high school was more cross-cultural, as he attended county schools with children from mostly rural Alberta farming communities.

Dale says, however, that it wasn’t until university that he learned about treaties. But while growing up on the reserve, his life was enriched by experiencing many powwows and other traditional ceremonies which involve dancing and singing. In his teens Dale learned about some dance ceremonies and took part in sweat lodges among others.

Dale’s great grandfather was one of those who kept the Sundance (thirst dance) culture alive underground during all those decades when it was prohibited by the Government of Canada. The prohibition of ceremonies was finally lifted in 1951, and continued sponsoring Sundance from 1952 onward. Dale argues that Indigenous peoples in Canada were not even considered to be human beings until these prohibitions were lifted.

Dale says that the success he has achieved in life is rare among indigenous people due to systemic barriers. He credits his continued practice of traditional ceremonies for being able to keep going all the way through to postgraduate studies, in spite of the many negative influences that he and other indigenous peoples have had to deal with, living in rural Alberta.

Dale’s main project has been developing cross cultural curricula suitable for students from all cultural backgrounds, based on the outcome of Canada’s Truth and Reconciliation Commission 2015 ninety-four Calls to Action. He has consulted with numerous school boards on topics related to Indigenous curriculum design.

Dale has found that in northern Alberta and Saskatchewan, racism and stereotyping of indigenous people is still very prevalent among many of the people who live there. Dale says that Indigenous people are often living in second and third world conditions on the reserves, and that, as late as the 80s and 90s, the local KKK would gather after dark and burn crosses in the fields near Provost, Alberta, not far from the Saskatchewan border.

He says it is due to a kind of systemic racism that there are so many indigenous people in Canadian jails and that is why people like Kevin Annett — a white Anglican minister who tried to advocate for the Indigenous cause and who helped expose the residential school scandal through his movie “Unrepentant” — are so treated so badly.

Dale says the Northwest Mounted Police (now the RCMP) who were originally tasked with protecting treaty rights of the Indigenous, have instead historically turned to protecting the infringers. And regarding some recent Indigenous rights issues, he asks “what’s the use of a duty to consult, without those being consulted, having a veto over federal/provincial/municipal/county projects going ahead, if they are not in the best interest of the First Nation”. And he says that’s why the Mikisiw Cree will likely be taking their case against the Supreme Court of Canada’s recent decision against them to the UN.

It wasn’t that long ago that a pipeline blew up in BC and another Indigenous community had to be evacuated.

Dale believes that the best way to address the injustices of the present situation is through better education for young people. And that’s why he helped found the Douglas Cardinal Foundation for Indigenous Waldorf Education and spent so much time raising money to bring workshops that build skills developed in Waldorf settings, and to raise awareness about the potential for the development of Steiner’s methods and techniques for use in Indigenous contexts.

Like Douglas Cardinal, Dale was another Indigenous person from Alberta, who managed to overcome the challenges of his life situation and achieve something in the wider world. In Douglas’ case, that was becoming a world-renown Indigenous architect. Douglas Cardinal first discovered Rudolf Steiner’s architecture through a professor he had at the University of Texas. While Dale is Cree from northern Alberta, Douglas is Blackfoot from southern Alberta.

How did Dale Connect with Waldorf?

While he was working on his masters degree a few years ago at university, Dale’s computer broke, and he went to his band to ask for assistance to get a new one. Someone there decided that Dale should attend a week-long workshop on Waldorf Indigenous Education that was just then being given by James Brian at Enoch Cree Nation, just west of Edmonton.

So Dale went. He arrived a day after the start of the program. He soon recognized that Waldorf was the key he had been looking for, and he realized he needed to utilize these new insights into the capping paper he had been working on for his masters degree. That was the turning point and the start of his involvement with Waldorf, back in August of 2013. Dale was amazed to realize that Waldorf had been around for more than 90 years and he was only hearing about it for the first time.

Dale has introduced Waldorf to five or six bands but he says it’s like fighting the provinces or the federal government. He has had trouble getting many Indigenous leaders to take interest. He says that because of how the leadership of the bands was set up by the Indian Act, those who end up in charge are often more concerned with feathering their own nests, than in promoting understanding of treaties and the welfare of the band. But in spite of obstacles like these, Dale perseveres, and has increasingly been called upon by school boards to help design curricula related to Indigenous ways of being-in-the-world.

In March 31st of this year, Dale married an Nova Scotian woman, Dr. Claire Poirier, who was recently awarded her Ph.D. in anthropology with distinction. He says she has studied in Indigenous communities as part of her field work, and as an ethnographer.

And just recently, they have had a new baby. His name is Lazlo, born May 22, 2018. Dale is currently working on his Ph.D., while also doing a lot of volunteer work on behalf of the Douglas Cardinal Foundation to help promote Indigenous Waldorf education wherever he can. Dale also participated in last summer’s AWSNA (Association of Waldorf Schools of North America) conference in Bethesda, Maryland where he presented on Indigenous nehiyaw Steiner possibilities and joined with others to form a committee to promote social justice for all peoples, and sang in the Cree language for all the delegates.

Dale Saddleback will bring his wealth of knowledge and experience of Indigenous ways and culture to the RSCT’s Waldorf Development Conference November 9th and 10th at the RSCT in Thornhill, where he will be addressing the question of how to introduce teaching on Indigenous topics into the Waldorf curriculum. Don’t miss this opportunity.

Register now using the online forms at this link.